As and how the automobile industry is moving towards a more software-defined future, most automakers have set their sights on autonomous (or self-driving) vehicles. While complete vehicle autonomy is still some time away, the development of driver-assist systems has started picking up pace. Driver-assist systems were initially integrated into automobiles as safety features, but are now slowly taking the vehicles in the direction of full autonomy.

Driver-assist systems may be passive systems (working after a collision or incident has occurred, such as airbags) or active systems (predicting the occurrence of an incident and taking action beforehand). One of the most fundamental active safety systems is the Automatic Emergency Braking (AEB) system.

What is Automatic Emergency Braking?

An automatic emergency braking (AEB) system can activate the vehicle’s brakes automatically when it senses a potential collision. The system can be activated even when the driver has not given any brake input to the vehicle. Additionally, it can increase the braking pressure if it detects that the driver’s input is going to be insufficient.

Most of the time, the system will begin decelerating the vehicle when it feels like a collision may occur. Of course, sudden deceleration can also cause panic in the driver’s mind, so an AEB system is often accompanied by a Forward Collision Warning (FCW) system. The forward-collision warning system sends a warning to the driver in the form of a visible signal, an audible beep, or through tactile feedback. The FCW system gets triggered a moment before the AEB does so that the driver gets sufficient time to take necessary action to avoid the collision. If the driver fails to make sufficient efforts, the AEB will try to completely stop the vehicle, or at least slow it down considerably to mitigate the effect of the collision.

The Algorithm behind Automatic Emergency Braking

The software continuously calculates the potential of a crash while analyzing the sensor data. If a specific condition is met (i.e., a probable collision is predicted), it activates the FCW and AEB. Of course, the vehicle will not hit 100% brakes when the AEB is activated. It will first start deceleration coupled with light applied braking. Once the vehicle is very close to the obstacle and there is no or little input from the driver, the vehicle will apply 100% brakes to avoid or lessen the severity of a collision. 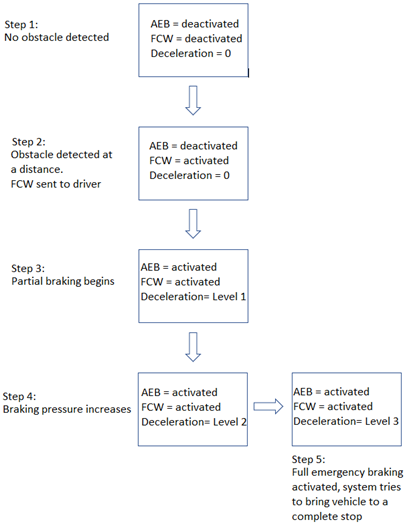 Thus, automatic emergency braking takes place in specific steps along with the forward collision warning system. Since the vehicle is calculating the risk of a collision in real-time, the system notes whether or not the driver has taken sufficient control of the vehicle and will be able to avoid the collision on his/her own. If the driver brakes the vehicle without any assistance from the AEB, then the system gets reset and goes back to step 1.

The real-time analysis of the sensor data uses a number of parameters to predict and make a decision on whether the AEB (or any other safety feature) needs to be activated or not. These parameters include:

At Dorle Controls, we develop software (ASW & BSW), integrate controls, develop sensor and actuator drivers for production and prototype vehicles. For more info on our capabilities and how we can be of assistance to your software controls needs, please write to Peter Juziuk (jpeter@dorelco.com).