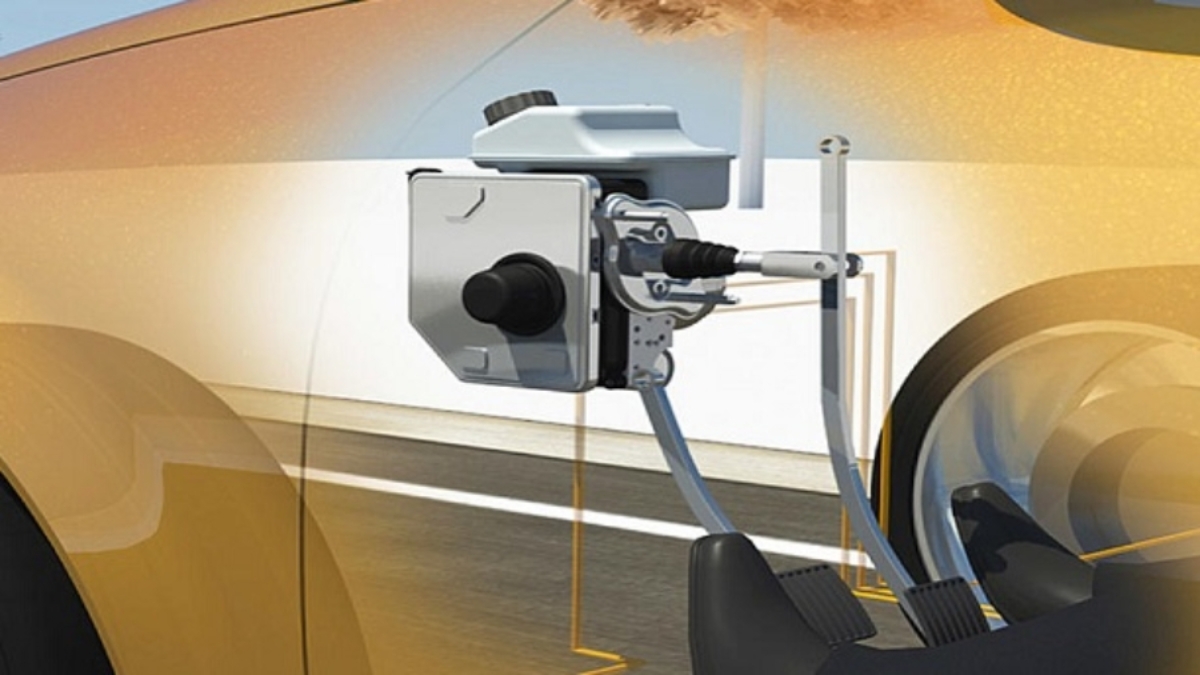 X-by-wire is an umbrella term used to describe electronically controlled systems in modern-day vehicles. These electronic systems often augment or replace traditional mechanical/hydraulic systems. This technology makes use of electronic controls to activate brakes, steering, throttle or shift commands, instead of using cables or hydraulic pressure. This helps in reducing the number of moving components, improving the efficiency of the system, faster response, and making the components less prone to wear and tear.

The origin of these X-by-wire systems comes from the aerospace industry. Fly-by-wire is a proven technology, wherein all control systems, sensors and actuators are electronically connected. The sensors measure the changes applied by the pilot, such as increasing throttle and controlling the yaw, pitch and roll movements of the aeroplane. These sensor readings are interpreted by the control unit and corresponding commands are sent to the actuators to implement the changes in trajectory or speed. However, applying this kind of system to road vehicles becomes complex, as there exist multiple dynamic objects in close proximity to every vehicle, and so, highly accurate, uninterrupted and quick responses are required. Finally, the aerospace industry has comprehensively-trained individuals manning the aeroplanes, who will have better intuition while using this kind of a system as compared to the average driver on the road.

Pros and Cons of X-by-wire systems

The use of such electronic controls helps in reducing the number of moving components in the vehicle, and also contributes towards decreasing the total weight of the system, which is an integral step in increasing vehicular efficiency. Additionally, electronic sensors can easily communicate with other active and passive safety features to ensure that special safety features such as electronic lane assistance, electronic stability control and adaptive cruise control can be easily integrated. These systems also allow better control than mechanical systems, while also giving a faster response. Finally, X-by-wire technology allows automotive manufacturers to get a significant amount of flexibility in designing the systems, as electronic controls don’t demand the same space and positioning constraints as mechanical controls.

The major drawback is that the reliability of such X-by-wire systems is not entirely foolproof yet, which means that most electronic control systems still need mechanical backup. Furthermore, the cost of implementing these systems is significantly higher due to the higher number of sensors and electromechanical actuators used. There is also a risk of mobile phone signals interfering with electronic control systems and communication systems. This interference needs to be prevented by properly isolating the spectrum of signal frequencies for different functions. Because of these issues, X-by-wire systems have received a fair bit of backlash from most automotive regulatory committees. 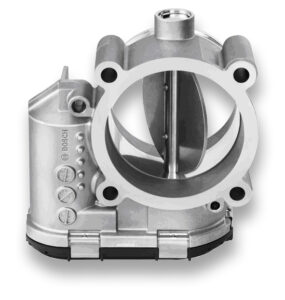 The throttle opening is thus controlled by the actuation of the pedal, i.e., if there is no signal coming from the pedal position sensor, the throttle is completely closed. Most throttle-by-wire systems also take feedback from the throttle position sensor back to the engine management system to ensure the mitigation of any errors. 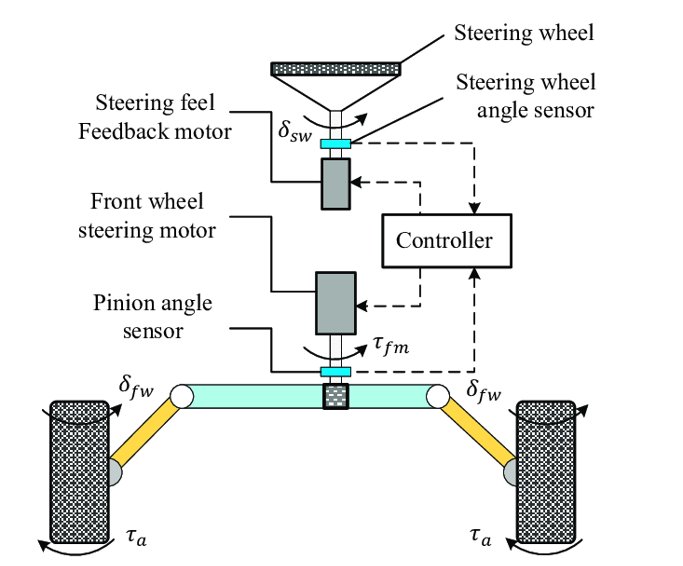 The steering rack actuator ensures the rack travel is in accordance with the signal received from the steering wheel sensor, which in turn ensures that the angle through which the wheels turn is in proportion with the steering input.

One issue that is often encountered while using sensors and actuators in place of mechanical controls is the sensor noise. Any kind of unnecessary data being captured by the sensor can affect the fidelity of the sensors which can lead to hazardous scenarios. Many developers overcome this challenge by using two different sensors at the same location to measure the same values, thus ensuring sensor redundancy. Sensors also need to be recalibrated throughout the life of the sensors based on their performance.

Future steer-by-wire technologies can also include adaptable settings based on the driver so that every driver gets to drive with customized comfort settings.

Brake-by-wire actuates the brakes electronically in addition to the mechanical connection between the master cylinder and the brake callipers. There are two types of brake-by-wire systems – electrohydraulic system and electromechanical system.

In electrohydraulic systems, the actuation of brake callipers on each wheel is still hydraulic in nature, but the physical connection of these individual callipers to the master cylinder is replaced by an electronic one. Pushing on the brake pedal activates a bunch of sensors, determining the amount of force to be imparted on the wheels based on the brake input, and actuating the callipers accordingly. Electromechanical systems, on the other hand, use electromechanical actuators to activate the callipers on each wheel.

The main issue with brake-by-wire systems is the complexity involved in the calibration of the hardware. The brake pedal position and the corresponding pressure exerted have a non-linear relationship. Furthermore, this calibration can vary based on vehicle size as well.

At the same time, brake-by-wire systems can easily be programmed to give varying outputs based on different driving conditions. The pressure being applied can be altered on slippery surfaces or based on the suspension and steering parameters to improve the safety of the vehicle, unlike purely mechanical brakes. 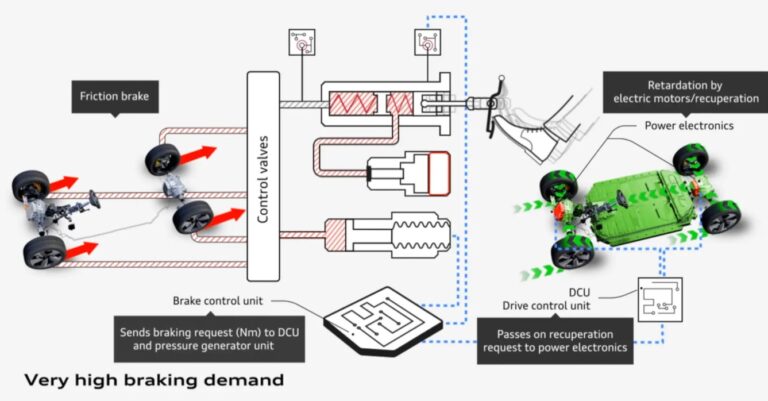 Brake-by-wire is a technology that is seen as more safety-critical than throttle-by-wire systems, as it takes the physical connection between the driver and brakes out of the equation. In almost all vehicles, brakes are the most powerful system, since the rate of deceleration of the vehicle has to be higher than the rate of acceleration. Any electronic failure or data loss can cause the brakes to malfunction, creating a life-threatening situation for the driver as well as the people nearby. However, hybrid approaches with electrohydraulic or electromechanical actuators help in designing fail-safes for the system. Many systems also implement backup mechanical controls, which spring into action in case of power failure or sensor damage.

Shift-by-wire essentially eliminates the physical connection between the gear lever and the transmission and replaces it with electronic controls. This also takes away the need for the gear lever in the first place. There can simply be buttons, switches, paddle shifters, or the touchscreen settings on the infotainment unit, for shifting between park mode, reverse, neutral and drive. This helps in decreasing the overall weight, complexity, and number of moving parts of the system.

The biggest advantage is the faster response of the gear shifts, as shift-by-wire systems can shift through gears as quickly as 50 milliseconds. With electronic shifters, you can also design foolproofs for deterring accidental shifts, thus improving the safety of the vehicle.

Errors in shifting between gears can also be mitigated using a shift-by-wire system. Error states can communicate with the ECU and relay information. For example, if shifting to a higher gear is not conducive at the moment because of high torque load, or shifting to a lower gear is dangerous because of the risk of tire slippage, then these potentially hazardous situations can be avoided by this communication. 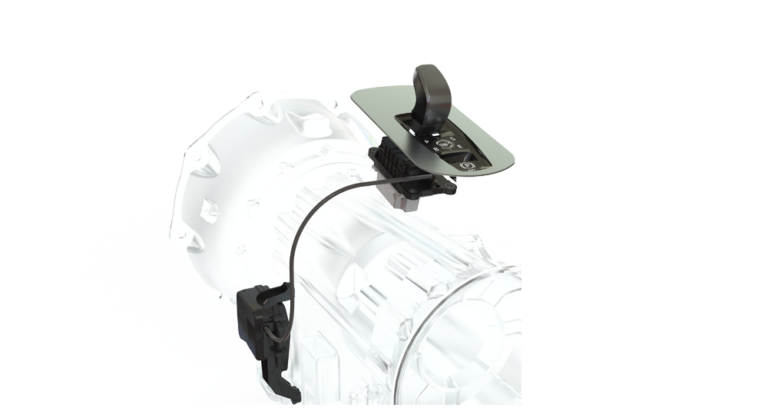 With electronically-controlled systems in the automotive industry on the rise, X-by-wire is a concept that is set to become a fundamental aspect of the field. At Dorle Controls, we develop controls software for X-by-wire systems and test them on the target hardware to get an understanding of how they can be implemented in modern-day vehicles. This includes designing an electronic throttle controller and testing the control logic on specific motors, implementing a steer-by-wire system on a test rig, and writing custom driver software controls for steering and throttle actuators.

Write to info@dorleco.com to know how we can help you write control software specific to your requirements.